There are many guitar string lubricants on the market today that use various components such as graphite, Teflon®, silicone, etc.  These substances all eventually migrate or dissipate with use leaving your strings with little or no lubrication or protection from oxidation and corrosion.  Some will actually dry out and cake up on wound strings. Graphite greases are messy and hard to apply in close tolerance areas such as tremolos often requiring disassembly.  Well, we’ve got a fast and easy solution to your string and instrument hardware cleaning and maintenance. 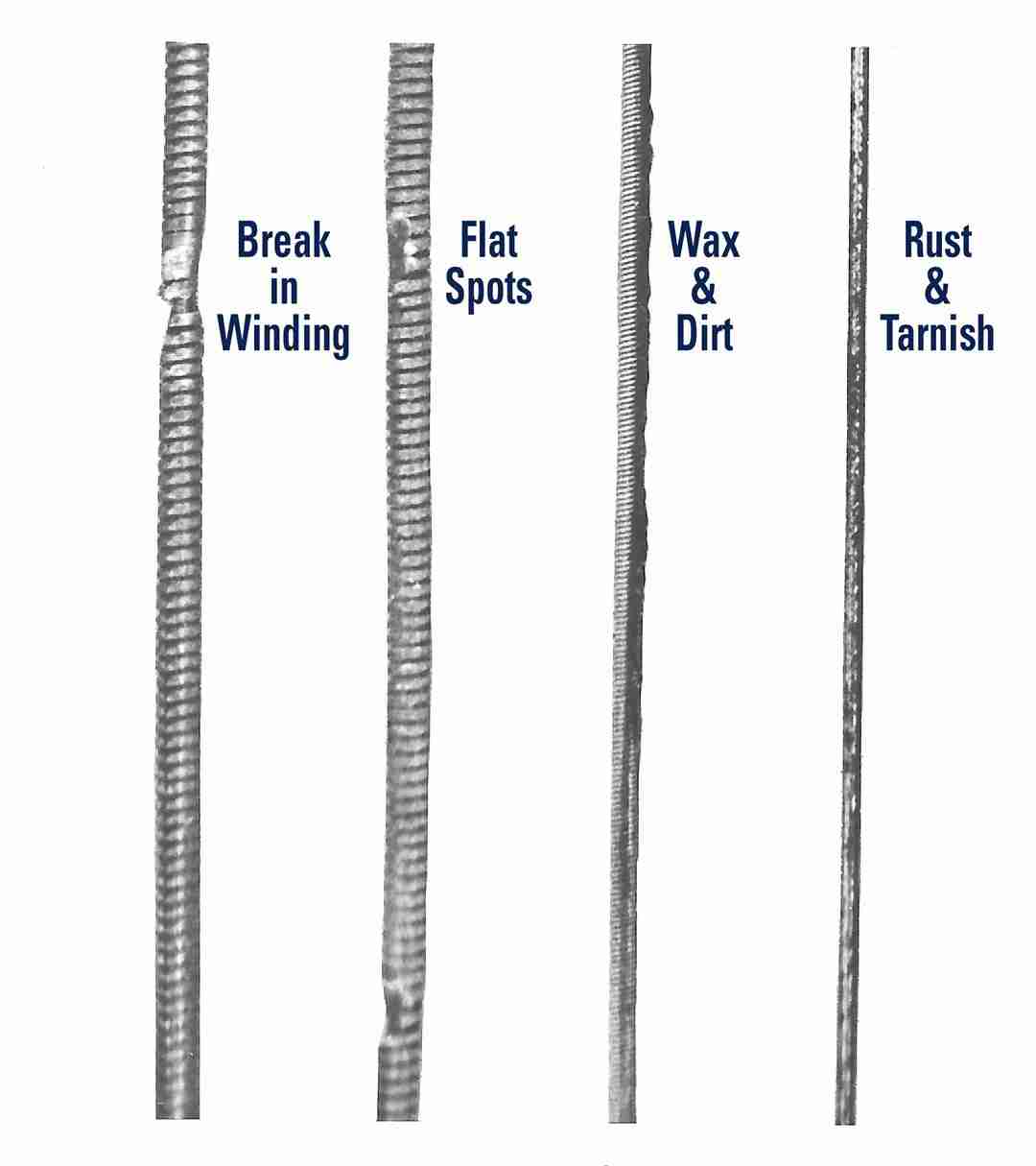 Three main elements: construction, gauge and tension of a string set will play a role in your decision about which set to purchase for your instrument.  So what happens to a new string set after initial break-in and you start to put some “mileage” on your strings?

When a string is pressed down on a metal fret of a guitar fingerboard a depression on the underside of the sting will eventually form depending on the number of times the string is “fretted” and pressure applied at that point. These depressions are often referred to as “flat spots” or notches. Certain styles of guitar playing like blues and rock will often include stretching and bending strings during a performance. This also increases stress and abrasion on the strings, nut and bridge grooves. When guitar stings are played hard and over stressed they break readily, especially the high-E, D, and G strings of narrow gauge string sets. They usually break at the bridge or point of highest tension.

One of the areas not commonly examined is what happens to a musical instrument string when it is plucked. When instrument strings are plucked they oscillate which means they vibrate at a fundamental pitch with associated harmonics along the length of the string. The photo illustrates standing waves on a string, illuminated by stroboscope. 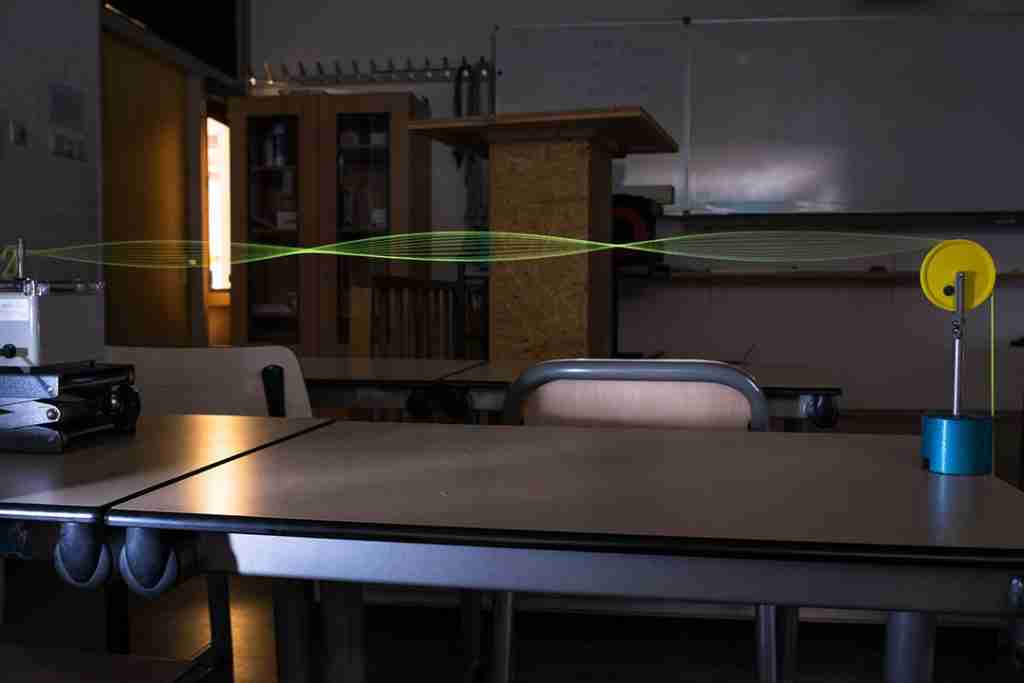 An instrument string is essentially suspended between two points, in the case of a guitar, a nut and bridge. The distance and tension between these two points will determine the frequency or pitch of the string. The photo clearly shows nodes that are formed when a string is plucked. A node is a point along a standing wave where the wave has minimum amplitude. For instance, in a vibrating guitar string, the ends of the string are nodes. By changing the position of the end node through frets, the guitarist changes the effective length of the vibrating string and thereby the note played.

This means the string is not only moving vertically, but horizontally along the plane of neck. This simultaneous movement is where microscopic friction and abrasion are created in the internal core of a wrapped string as well as the grooves of the nut and bridge saddle.

Microscopic internal and external friction is increased in the case of larger diameter bass guitar strings that vibrate at lower frequencies with increased motion and energy due to mass dynamics. String abrasion is also increased with metal bridge grooves. There are other factors affecting string performance at the molecular level such as metal composition and surface irregularities.

STRINGTone guitar string lubricant and conditioner is the perfect choice to either eliminate or reduce many problems associated with string wear and contamination. 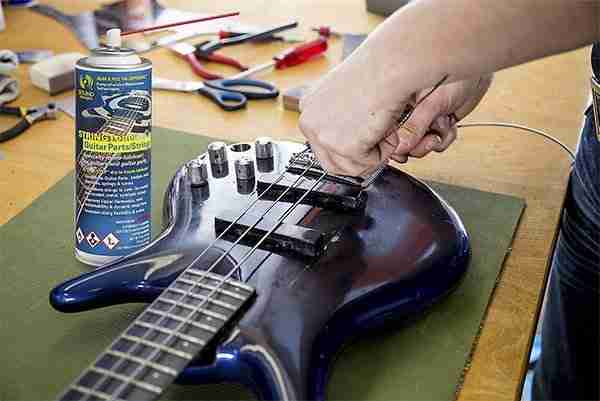 STRINGTone’s ability to easily remove spent rosin from string instruments is far safer and less toxic than traditional solvents like denatured alcohol. It will not harm sensitive finishes and is safe for use on all woods, plastics and cork. We do recommend testing on a small inconspicuous area or similar finish just to be safe. Simply apply STRINGTone® to a soft microfiber cloth and remove with a gentle scrubbing action.

Microscopic images show how STRINGTone® removes the grime, oxidation, and contamination that can quickly accumulate to rob your instrument of tone and sustain and produce slower, stickier playing response.

These SEM (Scanning Electron Microscope) images presented were taken at the University of Puget Sound Science Core Facility. The University of Puget Sound is an independent third-party and not affiliated with Sound Synergies. All our SEM images were taken under strict environmental controls and clearly illustrate the amazing results of SoundSynergies® products on a variety of new and well used components from musical instruments to sound producing equipment. 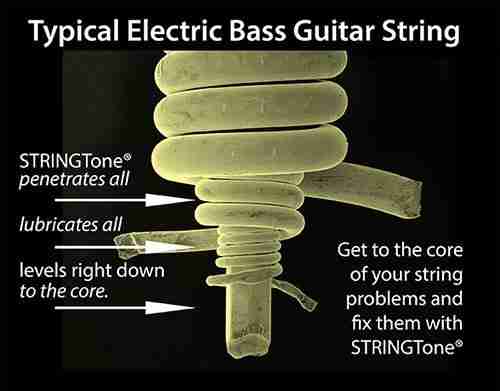 STRINGTone Penetrates Right Down to the Core

Cleans and conditions all external and internal string winding surfaces. Penetrates through all levels down to the string core unlike other guitar string lubricants that only treat the outer winding. 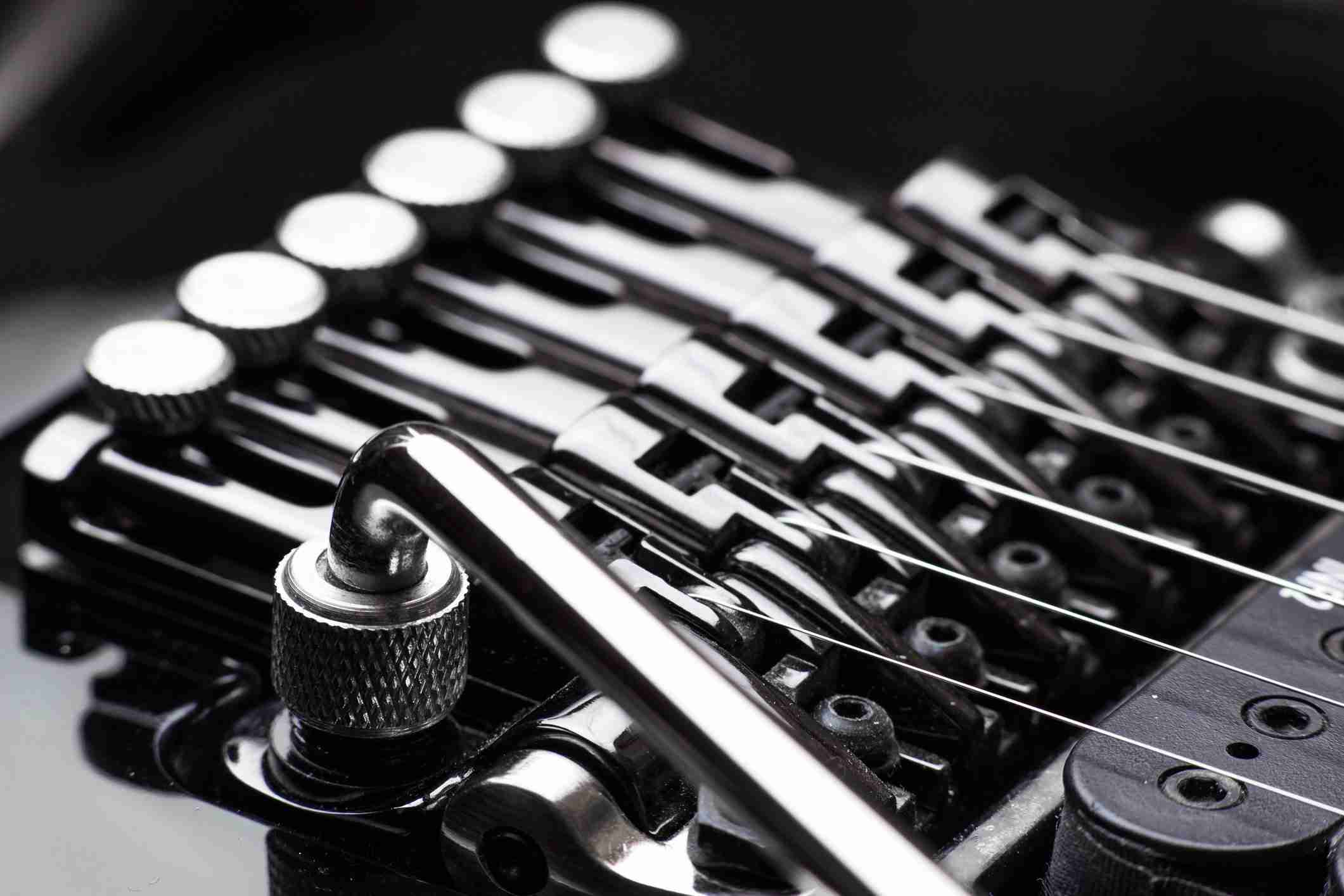 No need to wait for a string change, loosening strings, or disassemble complex hardware before applying to your instrument. 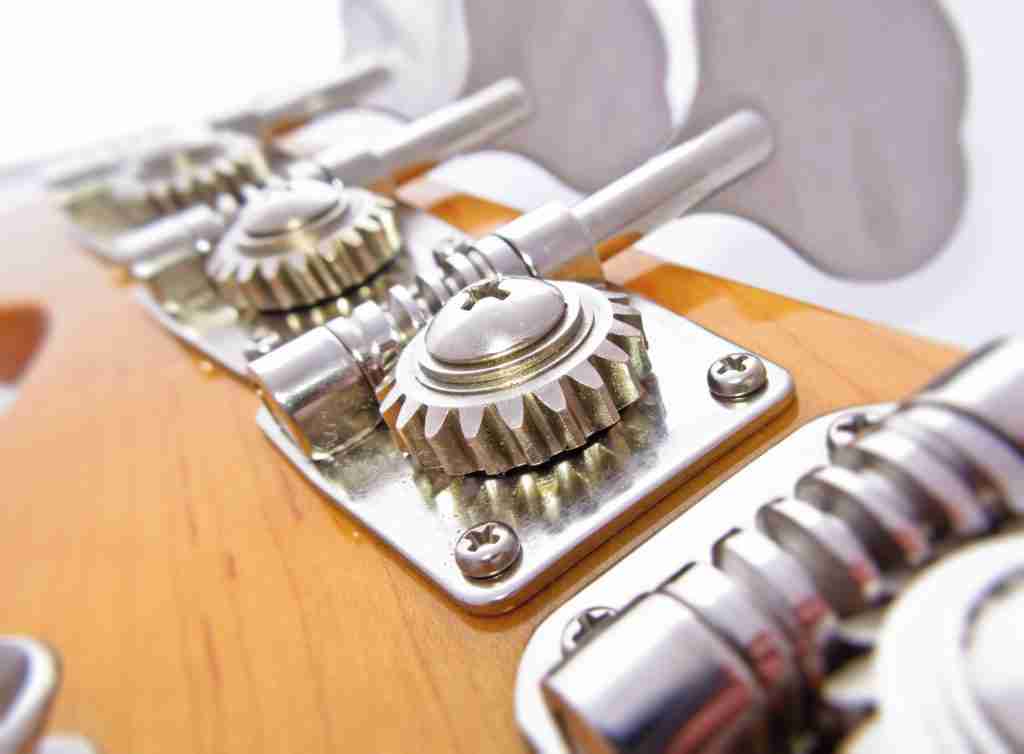 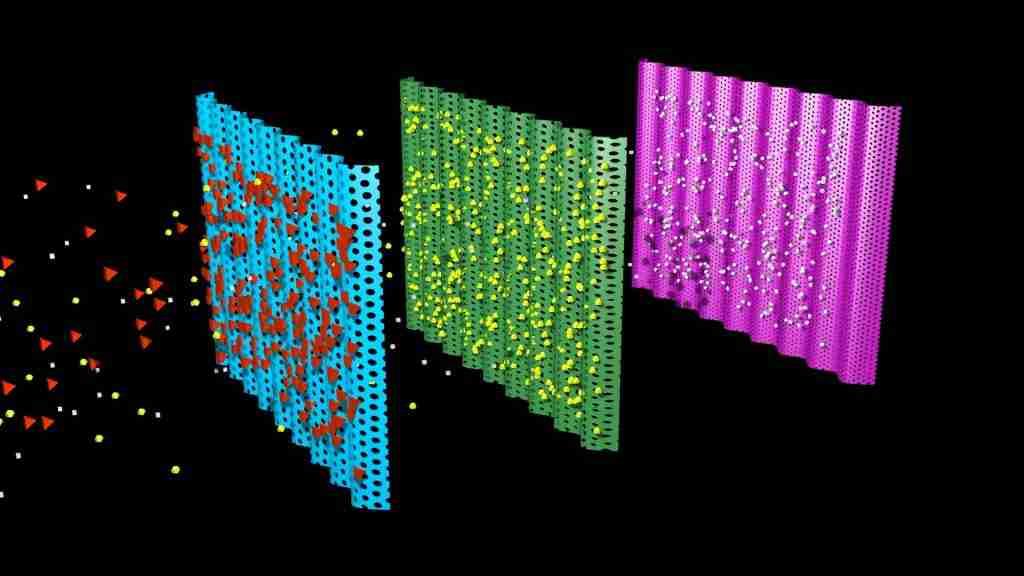 Our three step micro-filtration process removes suspended solids and other particles in suspension that allow our formulas to penetrate into micro-cracks and gaps as close as .1 micron (.0001 millimeter). Displaces moisture, cleans grit, grime, old oils and greases.

STRINGTone is the only guitar string lubricant containing a micro-filtered formula which penetrates into hard to reach areas where powdered graphite and graphite impregnated grease can’t reach. STRINGTone has been laboratory tested and proven not to migrate under high pressure and load. 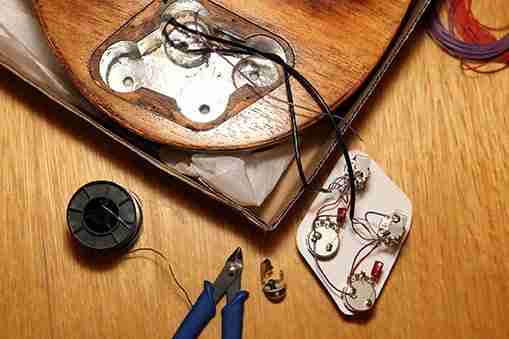 It’s not just another guitar string lubricant. Unlike other limited guitar care products STRINGTone® anti-corrosion inhibitors not only clean but provide long-term lubrication and metal conditioning for all electrical contact surfaces, parts and hardware. Safe to use on all finishes.

“Where STRINGTone really shines is cleaning, conditioning, and lubricating your hardware. Bridge saddles, tremolos/vibratos, and nuts all function and play better when clean and lubricated. Unlike other spray or powdered lubricants, STRINGTone leaves no residue, and does not build up or leave a sticky feeling. All you’ll notice is better performance: cleaner bends, dive bombs, and silky vibrato.”

Audio Comparison Tests – Before and After Treatment